With 13 boats having left Sunday (June 28) on the 2,800-mile Transatlantic Race 2015, a second group of 20 is likewise due to begin the journey this Wednesday (July 1) from a staging area across from Castle Hill Lighthouse in Narragansett Bayâs East Passage. It is ashore on the lighthouseâs rocky perch that the New York Yacht Clubâs Race Committee sets itself up to sight the start (1:50 warning signal for the dayâs first start at 2 p.m.), and it is there and on the opposite Jamestown shore that hundreds of people turn out to wave bon voyage to the fleet and revel in the spirit of adventure that permeates the air. With the largest, fastest, most powerful boats being saved for last (their start is on Sunday, July 5), this lot â with five Class 40s, 10 IRC Racer/Cruisers and five IRC Racing entrants â will have ample muscles to flex for its own duly impressive showing. Local Volvo Ocean Race/Team Alvimedica heroes Charlie Enright and Mark Towill will sail on Bryon Ehrhartâs Chicago entrant Lucky in IRC Racing class, while the worldâs most recognizable single-handed sailor, Sir Robin Knox-Johnston, will sail with four others on his Open 60 Grey Power in that same class. In 1969, Sir Robin became the first person to sail alone non-stop around the world. Since, he has circumnavigated the earth three more times (once on his own and twice with crew), but the 76-year-old is quick to point out that two others in his crew have sailed around the world singlehanded as well: Indiaâs Dilip Donde and Franceâs Bernard Gallay. âIf you include me, thatâs 60 percent of our crew and 1 Â½ percent of the 200 people in the world whoâve ever done it,â he said, adding that, by comparison, 680 people have gone into space. 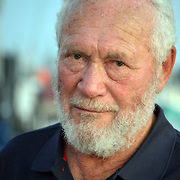 Sir Robin Knox-Johnston, the first man to sail around the world solo and non-stop, will sail his Open 60 Grey Power with four others in the Transatlantic Race 2015. (photo credit Jan Harley/Media Pro)

Filling the final two Grey Power crew spots are Monacoâs Joshua Warren and the UKâs David Aisher, past Commodore of the Royal Ocean Racing Club, one of the eventâs four hosts. (Royal Yacht Squadron, New York Yacht Club and Storm Trysail Club are the others.) While many boats will sail with 12-15 crew members, Sir Robin, who sailed Grey Power to third in last Novemberâs 3,542 mile single-handed Transatlantic Route du Rhum, says five wonât leave him shorthanded. âThe boat is designed for one person so I think weâll manage to do all right (laughs),âhe said, âbut we arenât expecting to win overall. We have a terrible rating. If Rambler 88 (a boat in the third start trying to break the race record) crosses in 6 Â½ days, we have to do it in eight â that just isnât going to happen. The priority is to get across safely, and after that, as fast as we can.â